In the series ‘What makes them tick’, Erasmus researchers explain why they love their research and where their passion comes from. In this episode, Assistant Professor Karin Willemse from the history department talks about her research on Africa, gender and Islam. ‘You can only be if you tell about yourself, both verbally and non-verbally: “I narrate, therefore I am”.’

‘As a social anthropologist, I conduct my fieldwork in Africa - most of it in Sudan and South Africa. I wrote my dissertation on the way women in Darfur negotiated the Sudanese government’s discourse of ‘correct’ Islam, while occupying a very prominent place in the public domain. I’ve also worked on the revival of sufism in Khartoum and the construction of Muslim identities in South Africa. Currently I’m doing research on heritage under threat in Nubia, Sudan. My research focuses on gender and labour, youth and Muslim identity, and currently on masculinity, violence and migration.’

What makes her tick

‘I fell in love with Darfur as a backpacking student of anthropology in the 1980s. At that time it was a virtually unknown area, where almost no studies had been done. But the people were so incredibly hospitable, so open in their communication. I was amazed.

‘And the women: they were loud, boisterous, very present – and so was I. Anthropologists always say the other is a mirror that makes us look at ourselves and our society. I found that mirror, in a society in which I never expected it.

‘I went back to do my PhD on gender and Islam. Because not much was written about it, I had to sit down with people, participate in their lives and practice oral history. I felt challenged and privileged at the same time by a society of which we in the West had such a low opinion.

‘During my research tensions arose because of the First Gulf War in 1990-91. There was a rapid change towards Islamisation and the country was on the brink of famine. Europeans were not looked upon favourably, questions related to Islam were very politicized, and because I wanted to keep a low profile I felt I could not ask too many questions. Therefore I just listened. Several times I wanted to leave, I felt I wasn’t the right person to be there. These people don’t need anthropologists, I thought, they need food and nurses. But the women told me: “Please, take our story with you in your airplane and let the world know how we suffer.” That’s when I realized I had to tell their tales.

‘I developed a method called ‘con/text analysis against the grain’, which allows you to peel off layers of a story. It makes one realize that the way stories about the past are told, says something about the present and the future. And that what people are actually saying, is not always openly said.

‘And that’s what makes me tick: stories. I come from a family of hairdressers, a storytelling family. That’s the familiar thing I found in these women, and that’s why I love my job. I can go somewhere, satisfy my curiosity, immerse myself in a society, ask questions and exchange stories. You can only be if you tell about yourself, both verbally and non-verbally: “I narrate, therefore I am”. I think that’s what makes the world tick.

‘Moreover, through stories I realized we have so many different cultures, histories and thus ways to look at reality. At the same time there’s so many things we share and can learn from each other. Understanding others, other societies and therefore ourselves, that’s my main drive.

‘Darfur, to me, will always be my second home. It always comes back to me, I dream of it, sometimes I wake up craving their food. When I went through a divorce and Christmas time arrived, I didn’t want to be home. Instead I decided to go to Darfur. And it was almost like they felt I was the one with a story now, and that they could comfort me. I didn’t have to feel guilty taking their story, our story, home.’ 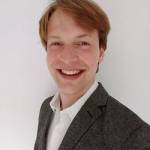 Ben Wubs about his research on the transnational fashion industry