From the International Office to stadium the Kuip

I guided students in their work for Feyenoord. That way, I could monitor if they were doing okay and if the project was moving along successfully. 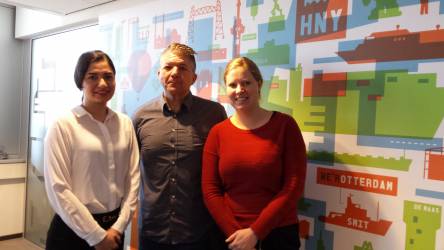 Temporarily worked at the FEYEUR project via Workspot

One day you are working at the International Office, the next you are working for Feyenoord: that can happen if you work at Erasmus University Rotterdam. Jenny Venhuizen responded to a Workspot vacancy and worked temporarily as project officer at FEYEUR, the partnership between Erasmus School of Social and Behavioural Sciences (ESSB) and Feyenoord Football Club. For her it was the first step towards a career as study advisor. For Project Manager Dr Brian Godor, Jenny’s appointment enabled the project to develop: “I couldn’t believe it - free support!”

Feyenoord is more than just the team and its supporters. Via the Feyenoord Foundation, the Rotterdam club is responsible for some 30 social projects with around 20,000 participants. These projects include making connections between unemployed young people and potential employers during special sporting events.

So it’s understandable that Feyenoord wanted to know the impact of its growing number of social initiatives. This led to Erasmus School of Social and Behavioural Sciences and the football club joining forces in 2018. Since then, students and researchers from various disciplines, from sociology to communication sciences, have researched the impact of the football club’s social projects.

“Our students interview people from traditional Rotterdam districts such as Beverwaard. It’s not research conducted in ivory tower isolation.”

Initially, Brian Godor, Project Manager of FEYEUR, was able to cope on his own: at that time he was supervising four students. The research conducted by these students was extremely relevant and was a good match for the Erasmus University Rotterdam ambition of conducting research that has more social impact, stated Godor. “Our students interview people from traditional Rotterdam districts such as Beverwaard. It’s not research conducted in ivory tower isolation.”

More and more students started to request research internships: in a short period of time the number grew to 12. Godor didn’t want to curb their ambitions and realised that he needed support in order to supervise the students properly. He then heard about the possibility of offering a Workspot: a temporary internal vacancy to promote employee mobility. Too good to be true, he thought. “Free support; that’s not in line with Dutch values, is it? As researcher you’re used to having to arrange a subsidy for projects via NWO or the Department for Education, Culture and Science.”

However, he decided to step off the beaten track and use the mobility programme and the associated Career In Progress fund. “It seemed like a long shot to me, but I submitted my wish list on the off-chance, without really having any expectations.”

And sure enough: he quickly received two mugs from Mobility Manager Nanette Compeer, filled with chocolates and with the text ‘100% match!’. International Officer Jenny Venhuizen had seen the Workspot. For some time she had been wanting to get more involved in supervising students and organising events. The vacancy at FEYEUR included both of these tasks. Jenny asked for Brian Godor’s contact details and they quickly struck a deal.

Jenny was not deployed just as an ‘extra set of hands for data cleaning’. She coordinated the internships at Feyenoord. Jenny: “This entailed appointing students and putting them in touch with Feyenoord. I then maintained contact with this group of students via two internship meetings so I could monitor whether everything was going well with them and with the project.” Her experience at the International Office meant that Jenny could also put together all the information for the future interns. She also helped organise the closing FEYEUR conference, in which students were given the opportunity to present their research to Feyenoord.

Jenny was not the only person who came to support the project. Sepideh Zargari relocated to the Netherlands with her partner after he obtained a PhD position at Erasmus University Rotterdam. She participated in the Dual Career Programme, in which partners of new international employees are supported in finding a job in the Netherlands. That’s how she became involved in Godor’s European project (Erasmus +). She maintained contact with various large international football clubs, in which, in the context of the project, coaches are trained in ‘life skills’. Initially, she was appointed as a volunteer, but Godor managed to obtain a SNIP grant so that her position became a paid one.

Focused on the future

The story of Jenny and Sepideh is the result of fantastic cooperation between the Mobility Manager, the Dual Career Programme Project Lead, and university researchers and staff. Godor is still extremely involved in Jenny and Sepideh’s development. “Workspots shouldn’t be misused simply to obtain additional manpower: the personal development of the person responding must come first.” He was and is actively involved in thinking about Jenny and Sepideh’s next steps. “Sepideh has a background in economics. I’m curious as to how she can use this for us. She is in any event extremely good at connecting all these international clubs.” After the FEYEUR project, Jenny followed a course to become a study advisor. Her job is now again being offered as a Workspot - an opportunity she would recommend to anyone.

What are they doing now?

Jenny Venhuizen is currently working as study advisor at Erasmus School of Economics. She advises and supports students. Jenny: “I use the experience I gained during the FEYEUR project interviews in my current job. Providing information is also part of this position.”

Sepideh Zargari started as a Grant Funding Support Officer in FEYEUR project. After receiving the SNIP grant, she continued as a Project Coordinator. As the project also received an Erasmus+ grant, she was hired by ESSB as a FAIRPLAY Project Leader.