When doing historical research, there is a large degree of subtlety and interpretation involved 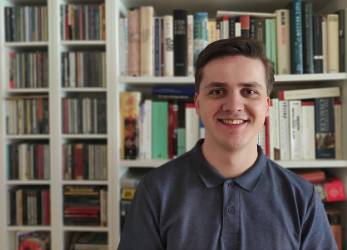 internship at the Stichting Verborgen Stad, together with three fellow students.

During my internship at ‘Stichting Verborgen Stad’ I did historical research on several relevant topics and locations in Dutch history. The idea behind this is that this information will be forwarded to text writers and digital designers. These people combine their talents and create what is called a 5D reconstruction of a historical place. This reconstruction serves to engage the user with history while maintaining a high degree of interactivity. The buildings are reconstructed using modern 3D modeling techniques and stories are added about certain buildings and the people who lived in them, thus shaping a certain historical consciousness.

During my internship I completed many varied tasks. At first, I focused on Polders and through studying 17th century maps I filled all of these in on a Google MyMaps map creating an overlay with the modern-day map. I also focused on the so-called Hoogheemraadschappen, which were in charge of water management in the 17th century. Later I also did a lot of research on several of our so-called Hotspots, primarily Delft and Leidschendam. Together with my fellow interns I researched historical material which could give us a clue about how those buildings must have looked like in the early 17th century. We also researched people that lived in these buildings through old tax records.

Corona has had somewhat of an influence on my internship. The bulk of the work in the earlier stages of the internship was done from home, and meetings were only possible via Skype. Later on, when several public spaces opened up again it became possible for us to do research in the Delfts Archief in Den Hoorn, where we found valuable visual material that helped us determine what the buildings that are visible from the Hotspot Delft must have looked like.

The most valuable lesson my internship has taught me is that, when doing historical research, there is a large degree of subtlety and interpretation involved. During the internship it was sometimes not possible to fully reconstruct a particular building with complete accuracy. A degree of historical interpretation was thus needed to make the building historically accurate. This was especially the case with certain buildings where the presence of a certain type of façade was not one hundred percent verifiable. In this case, me and my fellow interns had to apply our knowledge of 17th century architecture to complete the picture.

I found my internship through the Facebook page of History Career Services where all applicable internships are posted. I sent a letter of application and was invited to have a talk with Theo Pronk about the internship. I found that the prospect of this internship was quite interesting to me and decided to do my internship at De Verborgen Stad.

This internship has reinforced my team-work skills as well as helped me conduct historical research more precisely than before. It is a real joy to work with a team on a specific part of a historical reconstruction and finally find that last piece of archive material that ties the research together. I have developed skills to look at historical sources more critically, seeing as it was often the case that a source had to be scrutinized for historical accuracy.

In general, I don’t think that the internship has changed my future career plans. After my graduation, I would still very much like to work a job in which I would have some use of the skills I have attained during my Bachelor of History, especially in the fields of Political and Economic history, or local (Rotterdam) history. For me, this internship has only reinforced this feeling.

I would advise students to find an internship that fits their talents and interests. If this is the case it will prove to be a very pleasing experience to work on subjects which interest you and it will not be a problem to dedicate a lot of time to research the topics associated with the internship. I would furthermore advise students to look for an internship early, as to avoid unnecessary disappointment. During the internship I would advice the student to ask their supervisor questions if anything is not clear about the work.