The roots of sport philosophy and - ethics in the Netherlands are to be found at the VU University Amsterdam in Kinesiology. So not within Philosophy. For Meeuwsen, it was essential that sports ethics would recharge their philosophical roots. She explains: "Even internationally, it is unique to accommodate sports ethics at a Philosophy faculty. Just as, for example, business ethics or medical ethics are essentialy linked to academic philosophy..."

What are the benefits of this? "Sports scientists and policymakers tend to idealize the positive values of sport. In doing so, they coincide with the field of sport: sports administrators and coaches. Partly because of this, the ability to critically reflect on the whole course of events within sport is developed to a limited extent. You really need a certain academic distance to properly analyse what is going on here, to develop a systemic comprehension of all these integrity issues in sport now."

Looking to the future together

These are not straightforward dossiers that lay on the table. Meeuwsen says: "Integrity is a tough, recalcitrant issue, which also involves a certain reluctance to act, certainly in the sport itself. Externally, for example in the media, there is a lot of critical investigative journalism, but they use a tactic of 'blaming and shaming'. Sport shies away from that."

She explains that the days when sports administrators could look away are now well and truly over. Whether it is about harrassment, doping or match-fixing. Meeuwsen: "One can no longer maintain: 'These are incidents coming from outside, we have nothing to do with this.' We have to acknowledge that the integrity crisis has arisen in the very heart of modern sport." The fact that more and more stakeholders in sport, such as sports associations and municipalities, are now seeking guidance by ESPRIT underlines the urgency, and shows that now is the time to capture the future together.

Stretching one’s physical limits, going beyond one’s boundaries, is very common in sport. No pain no gain, that’s the motto, also known as 'supercompensation'; you need to go beyond a physical limit to perform better. A scientifically validated training principle in elite sport. However, this also creates a climate in which transgressive behaviour can easily take place. It presents sports federations with a tough challenge, in which ESPRIT can be an important partner.

Meeuwsen used to compete as a triathlete herself and recognizes the transformative power of sport: "But I also experienced how a downside can sometimes take hold of that positive process. I learned most from the periods when I was injured or overtrained. As a result, I learned to take care of my body, how to train properly, and ultimately perform better. There is always a certain reciprocity between the positive and negative side".

"Now is the momentum to guide modern sport’s future" 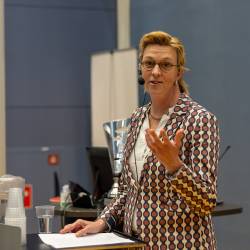 The sports philosopher sees an important role for science here: "We have to do both-and-and: both focusing on and improving that social significance of sport and being mindful of the risks and temptations; the downside." That downside, according to Meeuwsen, includes structural, systemic challenges. "Integrity issues are not isolated, let alone incidents. No, they are related to each other," she explains. "The struggles with admitting transgender athletes, for example, goes back to the binary organisation of sport. Excluding trans women will cause harassment and transgression. Now is the momentum to recognise that integrity issues are inherent to sport. In accepting this uneasy trouth, we can move forward with sport."

Meeuwsen sees that trust in the institutions that carry sport, such as FIFA and IOC, and in the Netherlands the NOC*NSF, is waning. At the same time, there are more and more autonomous initiatives, such as 'urban sports', people taking up sports in their own places. Meeuwsen: "Throwing logs, crossfit, 3 x 3 basketball, community sports, self-organised running, cycling, swimming. In each of these cases, no traditional sport federation is involved."

Meeuwsen explains that this has to do with current times: "We are leaving the anthropocene behind, with all the advancements that came with it. It's a different generation now, making different choices. This change fits with late modernity, in which trust in institutions like democracy and science is plummeting. "Sport will no longer stay a separate bubble that can just pass, but gets influenced by international politics, economic processes," she explains.

Projects from the professional field as a kick-off

ESPRIT works on questions from the field. Meeuwsen: "The shop is open, we have already started!" One of the questions that has now been incoming concerns the Youth Olympic Games in 2030. The municipality of Rotterdam has asked to collaborate on a long term program that invites a young, diverse generation to an active lifestyle. "But secondly, also raise awareness about social safety, physical well-being, integrity," she adds. "We are invited to guide the municipality: how do you reach those young people? Either at school, in their neighbourhoods or within sport clubs? Or should they choose social media? And then: what values will be central?"

Another project now under way: NOC*NSF, the Netherlands Olympic Committee | Dutch Sports Federation, asked ESPRIT to help with the changing gender diversity in sport. "That really is a hugely complex issue. This issue implies to rethink the DNA of sport: categorisation," Meeuwsen describes the problem. "It was once decided to define a women's and a men's category. But this binary paradigm is changing tremendously socially."

That this question is emotive is something the scientist herself has experienced at first hand. "I once stated : 'Aren’t we moving towards a non-binary society?'. The following week I was cancelled on Twitter, that is unfortunately the risk when you enter the public debate," she says. "But my main intention with that provocative question was to say: even in sport, what defines a man and what a woman, is rapidly changing."

Meeuwsen continues, "How can sports stay pleasant for a changing humanity? For a transgender woman, meaning someone who ‘biologically’ was born a man, it is super important to be allowed to compete in the women’s category. That is one of the main goals of their gender transition. And if sporting governing bodies then say: Fine, but we still consider you being a man... There are all kinds of assumptions around it and it's typically something of academic research to say: we're going to unveil and recalibrate those assumptions ."

"We have to feel discomfort to transform fixed values" 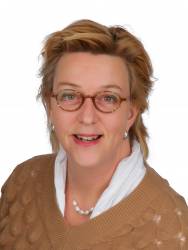 The concept of ‘Transition’ did not end up in ESPRIT's name by accident: the social changes that are underway or that are actually needed, are a constant theme in ESPRIT's research and mission. When asked what gives Meeuwsen something to hold on, her answer is very clear: "We have to move with a changing world and not want to hold on to tradition. There was a moment when I thought: no way am I going to bring out these explosive insights! But I went through that discomfort myself, and from that very point confronted sport. That's an opportunity for healing sport’s ethical core. We have to endure the discomfort."

Sandra Meeuwsen is scientific director of Erasmus Center for Sport Integrity & Transition (ESPRIT) since June 2022. She received her PhD from the Vrije Universiteit Brussel in late 2020 for a philosophical dissertation on the downside of modern sport.

The Erasmus Center for Sport Integrity & Transition (ESPRIT) aims to accelerate the ongoing transition of modern sport, taking its current integrity crisis as momentum for transition. To do so, ESPRIT brings together all relevant knowledge and experience into modern sport within Erasmus University Rotterdam, offering a unique combination of embedded ethics within the very heart of modern sport, and scientific research to support the challenges modern sport faces. The basic objective of ESPRIT as an interdisciplinary research group, is to explore and address complex integrity issues in sport, amidst a postmodern world in transition. ESPRIT offers both embedded ethics, scientific research, academic education and societal outreach, building on multiple expert perspectives on sport, to support a responsible systemic transition.

Join us for the launch of ESPRIT moderated by Olympian Minke Booij, and meet our academic staff and embedded ethics team.

He or she? Reality on the sports field is not that clear cut anymore

Sports philosopher Sandra Meeuwsen is critical of the international swimming federation Fina for excluding transgender women.
Related links
Majority of professional footballers admit to betting, including games in their own league