“About one-quarter of children under five in Vietnam are still stunted, whereas in urban areas like Ho Chi Minh City obesity rates are exploding”

Matthias Rieger is a micro-development economist and Assistant Professor at the International Institute of Social Studies (ISS) in The Hague. Much of his current work is focused on health behaviours and nutrition in the Global South. He has conducted fieldwork in countries such as Morocco, Central African Republic, Cambodia and more recently, Vietnam. Both child undernutrition and overnutrition are his current themes of research. “As we speak the Global South is home to the majority of obese individuals in the world. Obesity rates in the Global South are increasing rapidly. Many countries are going through a ‘nutrition transition’.”

How did you get interested in this subject – food and nutrition?
“When I started my PhD in 2009, I went to the Central African Republic to coordinate an impact evaluation of a World Bank project. It is an understudied and neglected country: its people have been suffering from French colonial legacy, bad institutions, despotic leaders, civil wars and persistent poverty.
We conducted a randomised impact evaluation of a large community-driven development project in rural areas. The idea of such ‘bottom-up’ projects is that communities decide how to spend block grants, for example on health posts or schools. An interesting question was how to measure the success of such a project. We decided to measure anthropometrics (height and weight) of children under five because they tend to be good predictors of household income, access to safe water and sanitation, as well as female empowerment and parental education. All of these in turn are variables that the development project may impact or leverage. I have been inspired by Robert Fogel, the 1993 Nobel prize winner in economics, and his work on the link between nutrition, economic growth and productivity.”

One of your projects was funded by the Gates Foundation. How did you achieve that?
“My work on the determinants of child stunting and child growth faltering received attention from the Gates Foundation. They started a big data project on child nutrition – the Healthy Birth, Growth and Development knowledge integration (HBGDki) initiative. The aim of that project is to use big data to customise interventions to reduce the global burden of child stunting. They asked me to write a one-page proposal on how I could contribute as a development economist and econometrician. I obtained funding for a post-doc and a Research Assistant for a few years. The project was very interdisciplinary, fast-paced and policy-driven. I presented some findings to Bill Gates personally.”

Why did you shift from the subject of undernutrition to overnutrition?
“Obesity rates in the Global South are increasing rapidly. Many countries are going through a ‘nutrition transition’. While the focus in research funding is naturally still on undernutrition, there is increasing attention being paid to overnutrition. I think the dynamics are such that many countries will be suffering from a double burden. A combination of under- and overnutrition could put a strain on health systems but also on the health and economic productivity of people over the life cycle. As an economist, I focus on the economic drivers of these dynamics.”

Can you give an example of recent research?
“In a recent paper in the Journal of International Economics, we study how the United States has exported its obesity epidemic to Mexico. Mexico is an interesting case because it has recorded a massive increase in obesity while engaging in trade integration with the US from the late 1980s until now.”

Does more trade with the US mean more problems with overweight people?
“Trade in processed foods and sugar-sweetened beverages went up by a lot in recent decades. And we find that food imports from the US explain up to 20% of the rise in obesity prevalence between 1988 and 2012. This effect is more pronounced among individuals with lower education levels, suggesting that trade and globalisation may widen already existing health inequalities. The message of the paper is clear: Economists often think that countries can gain from international trade, but population-wide bodyweight gains have been neglected thus far. Our study shows that trade policies needs to factor in public health concerns.
Another ongoing study of mine concerns Vietnam, where that transition is just starting. In Vietnam, about one-quarter of children under five are still stunted, whereas in urban areas like Ho Chi Minh City obesity rates among school children are literally exploding. Traditional Vietnamese meals are healthy, but kids are more and more exposed to processed foods, sugary drinks and Western-style fast-food restaurants.”

What can be done about this complex situation?
“I’m working with the University of Economics in Ho Chi Minh City and a nutrition centre to see whether conversations on healthy nutrition and exercise with parents encourage healthier eating behaviours and incentivise exercise. In a first field experiment, we provide information to parents augmented with behavioral economic insights such as goal setting and soft commitment and see how that provision impacts food preferences and health behaviors of schoolchildren.”

How can your research be of societal relevance?
“I am interested in causal economic drivers of nutrition outcomes in a given context. I tend to work with local experts, academics and policymakers to find out what factors matter, and which policies could work for a specific place. At ISS we care about research projects that inform local policies based on evidence, and ultimately lead to the discovery of concrete ways to reduce global health and economic inequalities.” 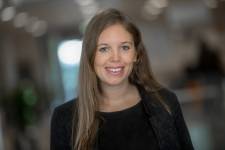 Anne-Kathrin Klesse, Associate Professor at RSM, studies how consumers can be nudged to make both healthier and more sustainable consumption choices.