Armenian student Gurgen Safaryan just finished his Erasmus Prepatory Year for refugee students at Erasmus University. This trajectory is set up specifically for refugee students and provides them with better chances for the future. How did Gurgen experience this and what are his plans for the future? Gurgen: "This was exactly what I needed. I was shocked by the support the team showed me, in a positive manner!"

Gurgen Safaryan lives in the Netherlands for eight years now and has a Dutch passport. Originally, he is from Armenia. There he studied Pharmacology, after graduating with high marks in secondary school. He worked a lot on international projects, about on human rights for example, in which he also visited Western Europe. After he came to the Netherlands, his diplomas were graded at the level of ‘havo’.

“After doing some research I found out about the preparatory year for refugee students at Erasmus University Rotterdam”, says Gurgen. “It was exactly what I needed, as I really wanted to study at a university. Some math, economy and also language skills in both English and Dutch.” It wasn’t easy for him to get in the programme. As he is over thirty, he wasn’t entitled to any financial support (like Dutch students). After talks with the Rotterdam Municipality they agreed to studying parttime after the Erasmus Preparatory Year, so he can work next to his studies.

The Erasmus Preparatory Year, part of The Language & Training Centre (LTC), is intended to prepare refugee students as effectively as possible for a higher education degree programme. Next to the State exam II and remaining sections of the civic integration exams, it pays considerable attention to English language proficiency, mathematics and specific computer and study skills. The programme is rounded off in April with admission exams.

"I really felt a connection like you do with a friendship or family. I didn’t experience that for a long time" 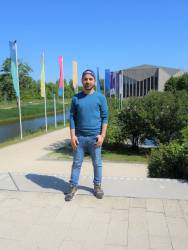 How did Gurgen experience the year? “The support by Kevin and Linda, who guide the group, was amazing. I was actually shocked by it. Also the language teachers, they are there 150% and I have never experienced that.” Gurgen is also very positive about the support the group of eleven students show amongst each other: “When I was very ill with an infection and I eventually needed to go to the hospital, I wrote a message to the group. Within a couple of minutes a lot of them replied. Someone came with me to the emergency room and others picked up medication I needed at a hospital on the other end of the city. The year broke some stereotypes for me. I really felt a connection like you do with a friendship or family. I didn’t experience that for a long time.”

There were also some less pleasant experiences. “The majority of the group speaks Arabic and sometimes there were communication problems because they were speaking in their mother tongue. But now we are speaking more English, although we should speak more Dutch”, says Gurgen. He also found the online lectures hard, especially in mathematics. “And we thought the focus on things like presentation skills was too much. We felt that we already knew these sorts of things, but it turned out we didn’t know enough already. Also, I struggled with writing motivation letters, I still do.”

Gurgen wanted to start with International Business Administration (IBA) here at Erasmus University Rotterdam. But the admission exams in the Erasmus Preparatory Year are held in April, after the application deadline for IBA. “Even though it is the same university no exemptions are made. It surprised me and made me angry, especially after all the support I received during the year.” He now applied for ‘Bedrijfskunde’ and ‘Bestuurskunde’ and hopes to get conformation that he is admitted very soon. “I always wanted to have my own business. Maybe I will start on online shop, start work as a consultant or be involved in an NGO’ like Amnesty. But this all depends on my health as well. I have had a kidney transplantation, so it will not be easy for me. However, I see myself in the business of helping people getting their life started here. Like Kevin van der Poel does, he is always there for us.”

The Erasmus Preparatory Year is offered by Erasmus University Rotterdam, in partnership with UAF.