On Friday 7 February, dr. Jacco van Sterkenburg, Erasmus School of History, Culture and Communications, will present about football and racism in the Belgian Senate building in front of politicians from different European countries.

Part of the presentation are recommendations for tackling the problem of football and racism in a holistic way, through measures at the micro, meso and macro level. For example, by addressing institutional forms of racism within football structures. Or by paying attention to the role of social media and mainstream media as a breeding ground for more explicit forms of racism in, for example, stadiums.

He was specifically asked to do an informative presentation including recommendations on the theme of football and racism for the 'Justice Committee' which consists of Dutch, Belgian and Luxembourg politicians, and to the so-called 'Contacts groups Nord Rhein Westfalen' (Germany) and 'Eurometropool' (Lille, Kortrijk, Tournai). These regions have similar problems during important football matches. The Justice Committee will advice members of parliament in the diverse countries. The other presenter on the day is the CSR manager of the Belgian Football Federation.

In the Netherlands, the theme is on the political agenda after the racist chants against footballer Mendes Moreira in the FC Den Bosch - Excelsior match at the end of November 2019. This Saturday, the 8th of February, the national Action Plan against racism in football will be presented in Amsterdam. 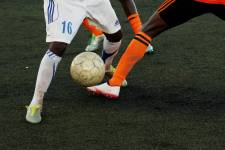 The racist treatment of Excelsior footballer Ahmad Mendes Moreira by supporters of FC Den Bosch last Saturday, November 16, was a much-discussed topic in the…

Van Sterkenburg in Nieuwsuur to talk about racism in football