Online activism during the corona crisis: successful or a failure?

Dumitrica has recently been researching #FridaysforFuture, the youth climate movement led by Greta Thunberg. How are their activities affected by the corona measures? Instead of striking in the streets, young people went on a digital strike and posted pictures of this on social media, tagging friends. Dumitrica saw something special happen here: the movement gradually posted less about activism and more about community building.

Delia Dumitrica finds it difficult to determine what happened to the movement's overall success. In her opinion, it seems that there was less media attention for the activities of #FridaysforFuture during the corona crisis than before the crisis. Dumitrica continues her story by saying that it is anyway very difficult for activists to reach an audience they do not know yet through social media: "We end up talking to the same people." This is exacerbated by the corona crisis and the (im)possibility of activities outside on the streets.

The controversial #ikdoenietmeermee campaign is, according to her, also a form of citizen participation, even though she does not agree with the goals of the campaign. It does involve a group of citizens who have a certain vision and concerns, and who are trying to influence political decision-making. "What I find interesting here is: what brings citizens to the point where they feel they need to support this cause?" she says. "So what can we learn from their worries or perhaps inequalities that transpire from this support?" A paradox that Dumitrica identifies here is that the goal of some action groups is precisely to bring about less democracy and participation, although they are thus using it themselves. 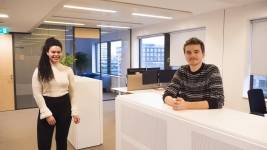 Daniel Trottier on conspiracy theories in the very first EURcast

In the podcast we talk to EUR researchers about various current topics and their own research.