"Sometimes, despite the official rhetoric, the law doesn’t protect the public interest”

Prof.dr. Alessandra Arcuri is professor of Inclusive Global Law and Governance at Erasmus School of Law and she is member of the Erasmus Initiative Dynamics of Inclusive Prosperity. She finds it important to have a critical look at international law. For instance, she looks at the important role international law could have – and sometimes fails to maintain – in working on SDG12: responsible consumption and production.

Drawing on UN data, she says: “Today we live in a world in which worldwide material consumption reached a 92 billion tons – and a 250 % increase from the seventies. The global material footprint is increasing exponentially, with high-income countries contributing the most to this unsustainable use of resources. How do international legal agreements relate to these numbers? Does international law facilitate the decrease of our material footprint? Or, could it be seen to even aggravate the status quo?”

How can we stimulate responsible production and consumption on an international level, by using the law?
“There are many ways by which laws could foster responsible production and consumption patterns. For example, in Europe we agreed on not accepting the import of any illegally harvested wood. This regulation may not solve all the problems of deforestation, but it is a small step in the right direction. Or think of laws regulating products produced with child labour, or under slavery-like conditions. In recent years, we have seen an increase in the  adoptions of such laws. The question is: are these laws serious enough?”

What is making you sceptical?
“We are dealing with a very asymmetric system, where transnational capital is highly protected, while the legal protection of the environment and common people remains relatively weak. Foreign investors, for example, have strong enforceable rights if they are treated ‘unfairly.’ Take the case of a German company producing oil and gas, that is threatening to sue the Netherlands, because the Dutch government wants to ban coal-power production of electricity. This German company says: ‘I came to the Netherlands with the expectation to make profit, so we will sue the government for opposing that.’ And regrettably, there are international treaties that allow such claim.
These types of legal challenges are completely against the idea of fighting climate change. If a company can sue another state for introducing environmental regulations, because they will lose money on it, this has enormous implications. Even if the state may win a dispute, it will cost the state considerable resources – which could be invested for more socially important goals – to defend its choices. What I’m trying to do in my research, is to unpack these laws and ask why do we have them? What interest do they really protect? Sometimes, despite the official rhetoric, the law doesn’t protect the public interest.”

And what does this have to do with SDG12?
“A lot! Many international treaties have facilitated an extractivist economic model, which nurtures unsustainable modes of production and consumption, rather than paying attention to responsibility. On the one hand, foreign investors are entrusted with strong rights; on the other hand, multinationals have hardly any responsibility. Think of how Shell and ENI have conducted their business in Nigeria. Or think of one of the most dramatic industrial accident in history, the Bhopal disaster in India in 1984. Over 500,000 people were injured by the methyl isocyanate gas, more than 20.000 people died, and many more are still suffering environmental damage. The amount of compensation awarded was ridiculous and there has been no serious restoration of the environment, notwithstanding the several attempts to obtain justice by the victims. Such an asymmetric legal system cannot certainly foster responsible production and consumption. The Bhopal accident is an example of how the legal institutions have actually facilitated unsustainable practices of consumption and production instead of fostering responsibility.”

What do we need in order to organise more responsible consumption and production?
“If we want to have more sustainable production and consumption patterns, we have to get serious about laws and regulations. As a legal scholar, I believe my role is to point at where the deficiencies in regulations are and unmask what lays behind the official rhetoric. By showing the contradictions of a system allegedly promoting sustainability, but de facto facilitating extractivism, I hope to help reverse this course of actions. The lawyers I would like to see in the future are the ones that do not only think of earning as much money as they can; they should be thinking of ways to serve society, not only clients.”

In your work, you say: there are problems with the concepts of the SDG’s themselves, what do you mean by this?
“One of my objections is that the targets that you have to reach in order to get ‘responsible production and consumption’ are very vague. It is all about willing-to-do-it, the solutions are based on pure voluntarism: ‘Let’s try to do it somehow, somewhat better’.”

Do you mean: the voluntary approach will not solve the problems?
“Exactly. Take the work of Tim Bartley on deforestation and private regulation. He has conducted fieldwork and research about the certificate FSC for wood. In an interview at Erasmus University, he explained that if FSC is trying to introduce higher standards, production immediately moves to another jurisdiction. He also reminded us that one of the scandals of the Rana Plaza disaster in Bangladesh (in which more than 1000 people were killed) is that the factory had been audited by corporate social responsibility initiatives.  These for me are clear evidence of the ineffectiveness of the voluntary approach. We need to set stricter standards and, possibly, coordinate more regulatory action at the global level.”

Do you work together with policymakers?
“I am sometimes invited by policymakers in Brussels or in the Netherlands. Last December, for example, I was invited by DG FISMA of the EU Commission to discuss current reforms regarding investment laws in Europe. Next to going to Brussels or The Hague, we organise conferences where we invite policymakers and other representatives of the civil society. For example, last June we organized  a conference on the most widely used pesticide worldwide. I also try to engage with policymakers in other ways. We wrote an open letter to an UN body, which is now supervising one of the most important reform process of the international investment regime.”

Is it hard to change European or international laws or regulations?
“Yes, it is very difficult. Much harder than to change a domestic law. At the same time, as a country, you have to be compliant with European and international law. Besides, many contemporary challenges are global, such as climate change. As a nation-state you cannot solve these problems alone. Hence, despite the difficulties in achieving progress at the international level, it is worth to continue working on that.”

In an earlier interview Prof. Alessandra Arcuri explains her research: “What is important to realise, is that for globalisation to work, we need to recognize each other’s safety standards and regulations. Many international agreements have thus resorted to science to settle conflicts about different regulations. This leads to an important part of my research focusing on the intersection of law and science on a global level." 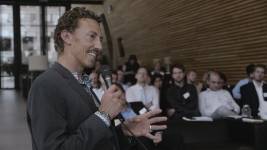 Assistant Professor Yogi Hale Hendlin is both public health scientist and environmental philosopher. A shift to local and sustainable agriculture is the only…