You wear a costume all year, but during Carnival you dress the way you are. 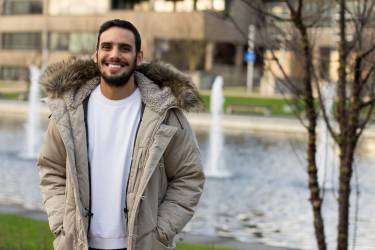 Student at Rotterdam School of Management

Brazilian Carnival (9 Feb – 14 Feb 2018) is an annual festival, marking the beginning of Lent (40 days before Easter). Large and small parades crowd the streets for the public to watch or participate in. Carnival is the most famous holiday in Brazil.

Daniel: "Historically, Brazilian Carnival is the passage to the Lent period, 40 days before Easter. This connection got lost, because when we think of Carnival we think of celebrating life and happiness. Brazil is a big country, so every region has its own particular way of celebrating. For instance, in Rio we tend to celebrate it together on the street, Sao Paolo has a big parade and in the North East everyone goes to one city which becomes a big hub where people party together. Look out for bloco, or blocks. There are specific groups called blocks, each with their own identity, their own style of music, catering to different kinds of people. There are bloco’s for children, the elderly, LGBTQ+ people, and so on. There are cars with sound and there are bands. And everyone follows them while dancing, drinking and listening to or playing music. They follow their own route through the city and have their own starting and ending times. It's no surprise that the city closes down completely and that you have to walk to get anywhere

Also, people dress up. Not too elaborately, because it’s very hot. There can’t be too much fabric. The clothes and costumes are more of a bit of fun, but some take the joke very far. This year I expect to see Donald Trump as a costume. The costume is more of a comical way to make a connection with people. You make a lot of friends when you go out. People say: you wear a costume all year, but during Carnival you dress the way you are. My best memory is when I went to Rio to enjoy carnival. When I landed and walked out of the gate, the Carnival spirit was so strong, it had even invaded the airport. There was a party at the boarding gate and the check-in hall. It was a reception that I’ll never forget. Carnival was everywhere.

For me, when I’m at Carnival, I like to celebrate connection. The way people forget about silly formalities. It doesn't matter if I don't know you yet, I can get to know you right now. It’s a celebration of connections and happiness. It's when I see Brazil at its happiest. Even though it's not religious, it’s sacred. People count down to it, nobody works, and the way people look forward to it is like Christmas. People can learn that formality can be good in some ways, but the most important thing is to connect. If the formalities keep you away from people, then you should think again. If you can’t connect, then something’s wrong. And anyway, it's good to be silly sometimes! Silly is healthy."