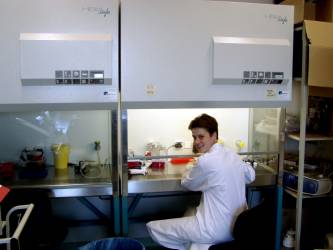 CAMK2 is one of the most extensively studied enzymes in the adult brain, but its role in neurodevelopment remains unknown. Research recently identified individuals with a neurodevelopment disorder characterised by Intellectual Disability caused by mutations in the CAMK2 genes – indicating that CAMK2 also plays an important role during neurodevelopment. Dr Geeske van Woerden will be investigating the role of CAMK2 in neuronal development and studying the downstream signalling pathways. These findings will provide new insights into and a better understanding of CAMK2’s influence on the etiology of neurodevelopmental disorders and will hopefully create openings for the development of therapies for CAMK2-related disorder patients.