I think many aspects of King’s Day represent diversity and inclusion at its finest. 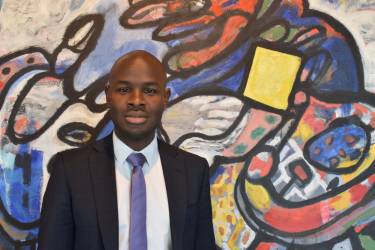 The Netherlands turns orange on the 27th of April. Why? Because of King’s Day! A national holiday in honour of the King’s birthday. For the Dutch this day means a day of celebrating, strolling around flea markets, playing traditional Dutch games, seeing the flag hanging everywhere and eating orange tompouces all day long. But what is this day like for expats and other foreigners? We asked Frederick Ntow, our new communication adviser at the Diversity & Inclusion Office, who is originally from the UK.

What does King’ s Day mean to you - after living in the Netherlands for several years?

‘In all honesty, until I moved to the Netherlands, I had no idea that King’s Day (back then it was Queens Day) even existed. Also, the concept of celebrating monarchical rule (let alone another monarch to my own), did not immediately appeal to me. Then somebody told me it was essentially a two-day party for the whole country, and I quickly dropped my principled objections.

After celebrating it for the first time, I knew that it’s the best day of the year! I say it’s the day when The Netherlands ‘gives back’ to those who find it a difficult place to settle. You have spring in full swing, so you see the beautiful tulip fields blooming between cities. The sun is out (or not), everyone is relaxed due to the holiday, and we all get to experience some light patriotism: Dutch style. Unfortunately for me, King’s Day is a green light to eat as much (orange) tompouce as possible.

As a former international student here, my first years were spent trying to negotiate my place within Dutch culture, with varying degrees of success. King’s Day at the time showed me a different, more expressive side of the country. My experience helped me to feel more settled and to meet people representing a broad spectrum of Dutch society. Over the years I have met new people, Dutch and from further afield, of which many remain are my best friends many years later. Simply, the experience of King’s Day helped me to feel part of something greater and eventually led me to be able to call here: home.’

How will you be celebrating King’s day this year?

‘My friends from London will be coming, and they will combine with my Dutch and non-Dutch friends here, with all of us united in diversity in high visibility orange garments on a boat in Amsterdam. And not only will there be loads of orange tompouces, there will be the inclusion of good food and drinks from all over the world also.’

What can the Erasmus University learn from King’s Day?

‘I think many aspects of King’s Day represent diversity and inclusion at its finest. Firstly, there is vast diversity in how people celebrate Kings Day, from people partying non-stop, to those soberly celebrating the royal house. From bargain hunters at the street markets to the people who don’t care at all and are just happy to have a day off from work. Regardless, I believe there are people of every background or status united in the same position.

Nonetheless as a shared experience, even draped in garish orange does have a binding effect on us all. Whilst it does not erase or ignore the differences in our society, it is meaningful that you might meet someone at a street market or street party you would probably never speak to because the only thing that matters on that day is orange.

For us in the EUR community, I think these principles are fundamental. No matter your study, your background or your level, the most important thing is the joy of learning. That is as much from shared experiences and communication with each other as it is from individual learning. We will meet people at EUR whom we’d probably never speak (or think to speak) to, but it’s an opportunity to make friends, colleagues, and partners of the future.’