The idea behind the Moon Festival is to celebrate that year’s harvests and show gratitude, but now, family reunion has become a central theme. 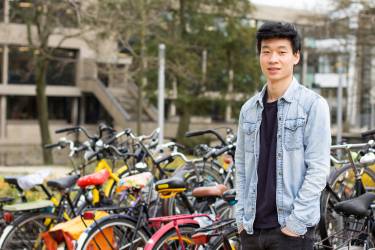 The Moon Festival, or Mid-Autumn Festival, is a harvest festival celebrated by many people in Asia. It is held on the 15th day of the 8th month of the lunar calendar during the full moon, when families come together to eat dinner and share Mooncakes.

Ou Lin: "There are many stories about the origins of the Moon Festival (or Mid-Autumn festival) which is celebrated by Chinese people all over the world every year. The story I like best is about gods, just like with the Greeks. Once upon a time, there was an immortal man with a beautiful wife, who was envied greatly in the heavenly empire. He was a favourite of the emperor. One day, they were cast to Earth to live there as mortals. One year, ten suns rose in the sky together causing great disaster to people. Riverbeds dried up and harvests were ruined. But the man was an excellent archer. So the emperor ordered him to shoot down nine suns to leave only one. As a token of admiration, he was gifted an elixir of immortality, but was urged to hide it well. One day, while the man was away hunting, his wife took the elixir. When the man got home, he realised that she had taken the elixir because she began to levitate higher and higher and float away. He even tried to shoot her down because his love for her was so strong. Eventually, she flew off to the moon. But because the emperor felt sorry for the man remaining on Earth, a palace was built for him and he was made immortal. On the 15th day of the 8th month (of the lunar calendar), he is able to visit his wife.

The idea behind the Moon Festival is to celebrate that year’s harvests and to show gratitude, but nowadays, family reunion has become the central theme with families gathering together to share food and eat.

As for me, I don’t celebrate the Mid-Autumn festival very elaborately. We come together as a family and eat a feast at home that my parents have prepared. Traditionally, we also make a Mooncake. This is a cake made out of beans, dates and lotus flowers and you’ll find an egg or duck’s egg in the centre. This tradition is disappearing, however, and most people tend to buy a Mooncake in a shop. We cut the Mooncake into pieces and share it with each other. The egg in the centre is supposed to symbolise a moon and the fact that it is round symbolises a family that has come together. In China, it’s also customary for children to make different coloured lanterns on which they write poems or wishes."

Because the Moon Festival is mainly a family occasion, you won’t see any celebrations in the Netherlands. Last year, the Chinese Student Association CSA organised a party at Club Nora with a Moon Festival theme. Even though this wasn’t a celebration in the traditional sense, there was Mooncake.