Borders are opening up and the first flights have taken place. But for most people this summer will be different. Luckily you can see the world watching films. And we have so many tips for you that we will provide you with another 15 next week.

1. Call Me by Your Name
Ultimate summer holiday film which make you remember your very first summer fling, just lounging near the pool.

2. Roman Holiday
Classic with Gregory Peck and Audrey Hepburn from1953. And even after all this time Rome still looks beautiful the same as during the scooter ride they take through the city.

3. American Honey
A teenage girl with nothing to lose joins a traveling magazine sales crew and gets caught up in a whirlwind of hard partying, law bending and young love as she crisscrosses the Midwest with a band of misfits.

5. Mamma Mia
Feelgood-musical on a Greek Island with music by ABBA and Meryl Streep stealing the show amidst an all-star cast.

6. 127 Hours
All right, this may not be the most logical choice in this list, but it is good to reflect on the times during travelling that things can go horribly wrong. And what do you do when your hand gets stuck in between centuries old rocks in the Grand Canyon. Look away around hour 126 if you don’t want to see what James Franco does in this on true events-based drama.

7. Into the Wild
Another true story-based drama; a young athlete says goodbye to everything and decides to walk to Alaska to live in the wild. Special mention for the very good soundtrack.

8. The Beach
After Titanic Leonardo di Caprio changes acting directions in this backpackers-nightmare turning in to paradise like and then back to nightmare again. The beach from this film has been closed of last year for all visitors to give nature a change to restore after being immersed in tourist tours for years.

9. Slumdog Millionaire
A Mumbai teenager from the slums reflects on his life after being accused of cheating on the Indian version of "Who Wants to be a Millionaire?" Did he or didn’t he?

10. The Motorcycle Diaries
The dramatization of a motorcycle road trip Che Guevara went on in his youth through South America that showed him his life's calling.

11. La Dolce Vita
Dancing in the Trevi fountain in Rome, everybody heard of this scene, but have you seen the film. This classic by Federico Fellini should be on your checklist.

12. Banana Pancakes and the Children of Sticky Rice
Beautiful documentary by Daan Veldhuizen on the impact of tourism on the most authentical places and the backpackers-dilemma. You will follow two friends from a local village and how they cope with all the changes tourism brings. After watching you will feel the dilemma for yourself.

13.   An/Sweet Bean
Burdened with a heavy and ever-increasing debt, a dorayaki baker hires a kind ageing woman, after tasting her delicious surprise. Little by little, she unravels her beautiful inner world. Could she be holding the secret to his success?

14. Tanna
Set on a remote Pacific island, covered in rain forest and dominated by an active volcano, this heartfelt story, enacted by the Yakel tribe, tells of a sister's loyalty, a forbidden love affair and the pact between the old ways and the new.

15. The Grand Budapest Hotel
Typical Wes Anderson film with an all-star cast filled with the strangest characters. Ralph Fiennes plays the flamboyant concierge of a five-star hotel who gets accused of murder, tries to outrun fascists and hopes to bring to young lovers together. And if that’s not enough he tries to run the hotel. 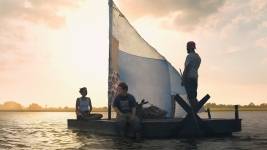 Go travel through film this summer. On a scooter through rome, walking The Grand Canyon or roadtripping with your best friend(s). SG takes you travelling from…