Tackling inequalities in the Wijkpaleis: Playing the game or re-writing its rules?

On Wednesday evening, February 16th, the Master Honours Programme ‘Tackling Inequalities’ had a session in ‘Het Wijkpaleis’ (the neighbourhood palace) in Delfshaven. With storm Dudley raging through the streets of Rotterdam, getting to the Wijkpaleis was already a challenge in itself. However, once we (the students participating in the programme) got inside, Fatma’s deliciously prepared Turkish meal made us forget about the storm straight away.

A place to come together

Neighbourhood cook Fatma Bhageloe prepares a lovely meal for Wijkpaleis visitors three times a week. While we were there, she mentioned several times that "next week she will make a Surinamese meal and we are all welcome to come again!" This mindset seemed very fitting with what the Wijkpaleis is meant to be: a place to come together and where people of various backgrounds can meet. According to their website, the Wijkpaleis is a place of ‘creating’, ‘meeting’, ‘learning’, and ‘entrepreneurialism’. As Marieke Hillen, one of the initiators of the Wijkpaleis explained, it is a place of making. ‘Makers’ who are renting studios upstairs create their own work but also contribute to the Wijkpaleis in other ways.

But, where does a place like the Wijkpaleis fit within a programme aiming to contribute to tackling inequalities? At face value, it seemed obvious; it is an initiative by people in the neighbourhood that emerged out of a sense of urgency – the urgency to have a space where all people of this very diverse area of the city could have a chance to come together. Within this space, everyone is equal.

However, how does such a space exist within a system in which arguably not everyone is treated equally or has equal opportunities? Something that is important, as guest speaker Robbert de Vrieze (one of the initiators of WIJ Delfshaven --a network of local citizens and their various initiatives) explained, is to guard your boundaries. It is essential to say ‘no’ occasionally, specifically to bigger corporations or people from the municipality. As Robbert explained, this is necessary to ensure that the power remains with the people and the initiative also remains for the people of the neighbourhood. Besides social initiatives (of which the Wijkpaleis could be an example), WIJ Delfshaven also aims to help make locals more resilient through economic networks. That is why, for example, they started an energy cooperative in which locals can invest (with their own money or through a fund available) in solar power rooftops.

However, it remains a challenge for these types of undertakings to stay inclusive and to ensure that everyone benefits. During the meeting, Marieke also talked about the ‘game’ they were forced to play with the local government. The challenge of such a game is often that the rules have been made up by a select group of people and can therefore also only be fully understood and followed by that same group of people. Perhaps this is also why Robbert found himself on the board of the cooperative with mainly other white men. Despite their inclusive intentions, there was still a difference between this ‘in-group’ and the rest of the members of the cooperative. This is why they decided to look for mechanisms to include every member in the important decisions, which helped a lot.

Another challenge they face is the fact that this ‘game’ is also a political game. Power battles are being fought behind the scenes resulting in disappointment for these grassroot undertakings, which adds to distrust in the government, according to Robbert. So then, how do you keep people motivated to participate if they are disappointed by the government over and over again? Robbert’s formula is “doing it yourself”. So this is what he and his team will keep doing; encourage initiatives flowing from locals and focus on increasing welfare and resilience for people.

Another essential aspect of a successful locally rooted and inclusive cooperation is to involve community leaders who, in turn, are able to get many people involved. However, the question remains: can everyone take an equal part in such undertakings within an inherently unequal system? Or should we rewrite the rules of the ‘game’ together to really ensure equality? These were some of the key questions with which the Tackling Inequality honours students left the Wijkpaleis that stormy night. 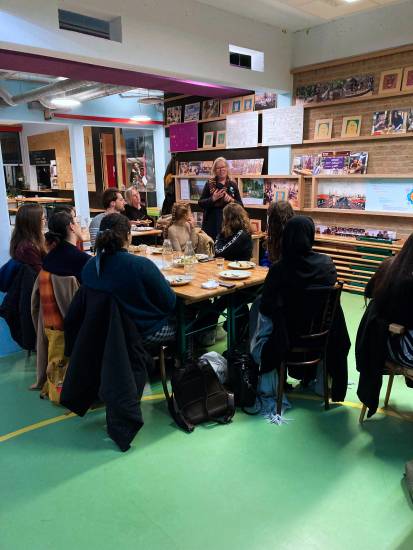 Tackling inequalities in the wijkpaleis

Are you a lecturer or a student and do you have interesting learning experiences to share with us? Please contact us!

Maud van Roessel and 17 other MA students participate in this year’s Tackling Inequalities MA Honours Programme. She and her classmates come from 7 different faculties and 16 different MA programs. Maud’s is ESHCC’s Media, Culture and Society.

Tackling Inequalities is EUR’s interdisciplinary MA Honours Programme. Led by Jiska Engelbert, the program guides students through Rotterdam’s most pressing social issues and how to fight them. Students so not only come in contact with EUR academics, but also with a diversity of citizens –from activists to city officials—and programs aimed at advancing social justice in the city. The week before students met Marieke Hillen, Fatma Bhageloe, and Robbert de Vrieze in Delfshaven’s Wijkpaleis, they had been in Hillesluis. There, in Humanitas’ Huiskamer Riederkwartier, they had heard from Rotterdam’s stadsmarinier for issues of inclusion and diversity, Marcel de la Haye, and EUR academic Mark van Ostaijen. On February 23, in turn, the program took students to Het Gemaal op Zuid, in Rotterdam’s Afrikaanderwijk, and to Armenius in Museumpark. In Het Gemaal, they met Recht of the Stad activists Mustapha Eaisaouiyen, who showed them around the area, and with Joke Schot and Roland Huguenin, who introduced them to their photo exhibition “Uitgedoofd en Ontzield” (Extinguished and Inanimate). In Armenius, they attended a debate about the current housing crisis, organized by De Dépendence and where they could hear from leading experts David Madden, Gwen van Eijk, and Cody Hochstenbach.