Embracing the diversity of the College and beyond

“A moment of collective learning and reflection aimed at widening our community.” That is how the Erasmus University College (EUC) described its first iftār event in the invitation that reached and brought together Muslims and non-Muslims from inside and outside the college. In total, some 60 people registered to participate.

The space reserved for the event, EUC’s ground-floor Atrium, was packed by 19:30 hrs. A few minutes later, presenter Marianne Vorthoren opened the event by stressing the value of sharing a meal and confirmed the exact time when that would be possible: On April 6, sunset in Rotterdam would end at 20:29 hrs. At that time –more than 15 hours after the sun had risen and many in the room had eaten for the last time—fast could be broken. A prayer, dates, and water would mark the moment and lead participants to the shared meal.

Religion and spirituality in the university

EUC’s dean, professor Gabriele Jacobs, proudly described the event in relation to the College’s efforts to reach a more diverse student body and to collaborate with the Islamic University of Applied Sciences. “What is the role of religion and spirituality in the university?” she asked. In her view, it is their capacity to bring together people from different backgrounds and beliefs and contribute to solidarity.

At least here, togetherness and solidarity could indeed be felt among participants and gained additional strength in the words of the other speakers. Professor Thijl Sunier explained the value of “public iftārs,” like this one, for mutual understanding among Muslims and non-Muslims people. Iman Iftekhar Ali Chishti, in turn, described Ramadan as a purifying period that connects Muslims more closely to God, to themselves, and to other human beings, especially those in need.

EUC student Will Shain is not a Muslim. However, he did not only join the iftār celebration, but also one week of fasting. “More than 1,5 billion people in the world are doing it; I want to at least be able to understand and connect with them.” His experience, as a non-religious person, cannot be the same as that of Muslims, he explained, but it is valuable.

Saudi student Hala Abohaimed agrees. In her view, “it is super special and heartwarming when people who aren't Muslim not only celebrate Ramadan with Muslims, but take the extra step to organize such a celebration as the iftār.” Hala studies Media and Communication at EUR’s Woudestein campus and was happy a friend invited her to EUC‘s iftār celebration. “I felt a sense of belonging even though I did not know one soul in that room except for my friend who invited me to the iftār. I felt welcomed, loved, and cared for, and I really felt a sense of humanity in that room.”

The nearby Gültepe Mosque had helped EUC organizers to set up a special praying room with prayer rugs. There were also printed questions laid out at the different tables during the dinner –in both English and Dutch—for people to further learn from and with each other. One could read: “When did you first participate in a Ramadan celebration?” “What steps did you take to celebrate Ramadan sustainably?” “Have you ever considered sustainability from an Islamic perspective?” “How can EUC better embrace its own diversity?”

The answer to this last question goes beyond the College’s more immediate diversity to also cover its wider relations within the city. Indeed, this is how the main organizer of the mini-symposium and iftār, the Head of the Social and Behavioural Sciences Department, Ward Vloeberghs, described the importance of Ramadan at EUC in the text accompanying the program:

Twice as many residents of Rotterdam have an Islamic background (13%) compared to the national average (5,2%). This means that we as a learning community mindful of its surroundings want to connect with our fellow citizens in an inclusive way. One of the priorities in our diversity and inclusivity strategy is to reach out proactively to those socio-economic groups we find underrepresented within our EUC and EUR community. Ramadan offers a beautiful occasion to do so in a genuine way that can serve as a moment for collective learning and bonding.

An important step toward this event was a mini-symposium on “Ramadan and Sustainability” organized at EUC on March 30. Speakers there included students and lecturers from the College and the Islamic University of Applied Sciences, as well as Wietske Merison, secretary of the Green Muslims [Groene Moslims] foundation. They discussed key Islamic principles supporting frugality and harmonious relations with nature. It was not a surprise, then, that the iftār meal of April 6 was vegan and vegetarian and that measures were taken to be generous and celebratory, but also to avoid food waste. At the end, everything was distributed among visitors in containers people brought or improvised.

Iftār is the communal meal with which Muslims break the evening fast during the sacred month of Ramadan. In 2022, in the Netherlands, Ramadan goes from April 2 to April 30. For Muslims, this is a period of reflection and purification, during which they fast between sunrise and sunset. 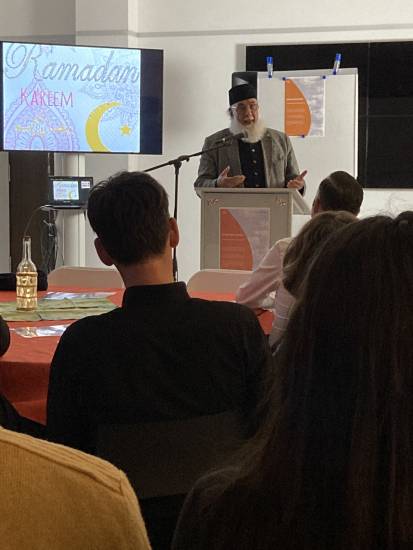 Are you a lecturer or a student and do you have interesting learning experiences to share with us? Please contact us!