Dianne Bevelander, Professor of Management Education at Rotterdam School of Management, is the winner of the 2019 FAME Athena Award. She will be presented with this award for her seemingly boundless commitment to promoting women’s growth, as well as her efforts to increase women’s input and influence in important positions. For example, Professor Bevelander is the founder and director of the Erasmus Centre for Women and Organisations.

Over the course of her career, Dianne Bevelander has proven a steadfast supporter of female colleagues and students. She is seen as a true ambassador for improving the position of women: a ‘champion of gender diversity’. Her hard work and her own research have significantly contributed to progress in diversity-related issues.

Her dedication is also reflected in a number of initiatives that she has set up, or helped set up, to improve the position of women. Examples include the RSM Women Empowering Women Kilimanjaro Leadership Project and the Women in Leadership Executive Open Programmes. In addition, Dianne Bevelander is the founder of the Erasmus Centre for Women and Organisations. Through these and other initiatives, she has helped to improve women’s perspectives. A great many people have benefited from these programmes – both in and outside the university. Listing its reasons to honour her, the jury writes: “Dianne is a figurehead, has achieved concrete successes and has made a substantial difference for many people.”

Erasmus University Rotterdam and Female Academics Moving toward Equity (FAME) network work to achieve equal representation for female members of staff. FAME has established the Athena Award to honour university staff members who have made an exceptional effort to promote female talent – and set a fine example for their colleagues in the process. Dianne Bevelander will be presented with the FAME Athena Award during Erasmus University’s 106th dies natalis on Friday, 8 November. Dr. Liesbeth Noordegraaf and rector magnificus Professor Rutger Engels will be bestowing the honour. 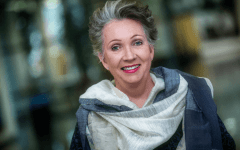 EUR to work with several institutions on removing barriers to the recruitment, retention, and career progression of female researchers.