Lizzy Boonen, HR policy officer at Erasmus MC, has won the 2018 FAME Athena Award. This award is for an Erasmus University Rotterdam employee who has made exceptional efforts for female talent. According to the FAME Athena Award jury, Lizzy Boonen is a talent development and diversity role model, ambassador and inspiration. She will receive the award during the 105th Dies Natalis on Thursday, 8 November 2018.

According to the jury, Lizzy Boonen established the 'Female Talent Class' (FTC) within Erasmus MC with passion and enthusiasm. This is a programme for talented young female researchers and doctors in training who recently obtained a PhD or are in the final stages of their PhD. Boonen also contributes to 'VENA' (Women within Erasmus MC Network for Academics).

In the nomination, no fewer than fifteen Erasmus MC employees expressed their appreciation for Lizzy's work. 'Partly because of this, the jury's opinion is that Lizzy acts as a role model, makes a substantial contribution to strategic objectives regarding talent development and diversity within EUR and, therefore, as true ambassador and inspiration for many women and men, deserves to receive the FAME Athena Award 2018', stated the jury.

The jury further suggested that the way in which she has achieved all this is deserving of commendation: 'Lizzy Boonen uses a personal approach towards her colleagues and, full of enthusiasm and passion, conveys the diversity topic to them and gets this on the agenda. She has made structural contributions to ensure that female talent is already recognised and stimulated in the organisation at an early stage.'

Lizzy Boonen will receive the Athena Award - a customised painting by artist Sofja Wolsky and a certificate signed by the Rector Magnificus and the FAME chairperson - during the 105th dies natalis on 8 November. The Chief Diversity Officer, Professor Semiha Denktaş, and Rector Magnificus, Professor Rutger Engels, will issue the award.

More information about this celebration, part of the 21st Lustrum, can be found here.

Erasmus Universiteit Rotterdam and the Female Academics Moving toward Equity (FAME) network aim for a proportional representation of female employees. With the Athena Award (previously ENVH Athena Prize) FAME focuses attention on employees who make exceptional efforts for female talent - and in doing so act as example for colleagues. 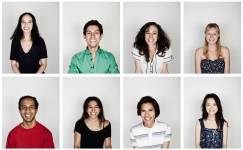 Erasmus University Rotterdam celebrates the university’s 105th anniversary on Thursday, 8 November 2018. Find out more about the theme, programme and registration.